Are Roman Shades Right For You?

Custom, full-length drapery has a well-deserved reputation for richness and drama, but it isn’t necessarily the best choice for every room. Where a more streamlined look is desired or space is at a premium, Roman shades—fabric window coverings that stack neatly at the top of the window when retracted—may be the better option.

“They can provide more of a clean-lined architectural look than full-length drapery in most situations,” agrees Abby Rodriguez, vice president of New York’s Chelsea Workroom, which produces window coverings, upholstered furniture, and other soft goods.

In addition, Roman shades have a practical appeal. “When you have built-ins and banquettes against the wall, you can’t do full-length drapery,” says Rodriguez. “Roman shades can provide windows covering, without having the concerns of wall space or lack thereof.”

But not all Roman shades are created equal. To help determine the best setup for a space, we asked Couturier and Rodriguez to share their thoughts on the many available options.

The choice of face fabric is the most critical decision when planning custom Roman shades, and it’s not just because the material will set the color and pattern of the finished product. The fabric will also affect the shade’s translucency, as well as how easily it will operate and stack when retracted.

“When you’re selecting fabric for a shade, light- and medium-weight materials are fine, but it’s important to avoid very heavily embellished fabrics or those that are just too rigid,” says Rodriguez. “You want the folds to lie nicely one on top of the other, and the thicker your fabric is, the harder that is to achieve.”

Fortunately, it’s easy to test pliability with a fabric sample, she notes. “Fold it over a couple of times to get an idea as to how it reacts to being molded,” she says. If the fabric won’t lie flat, it may not be the best candidate. 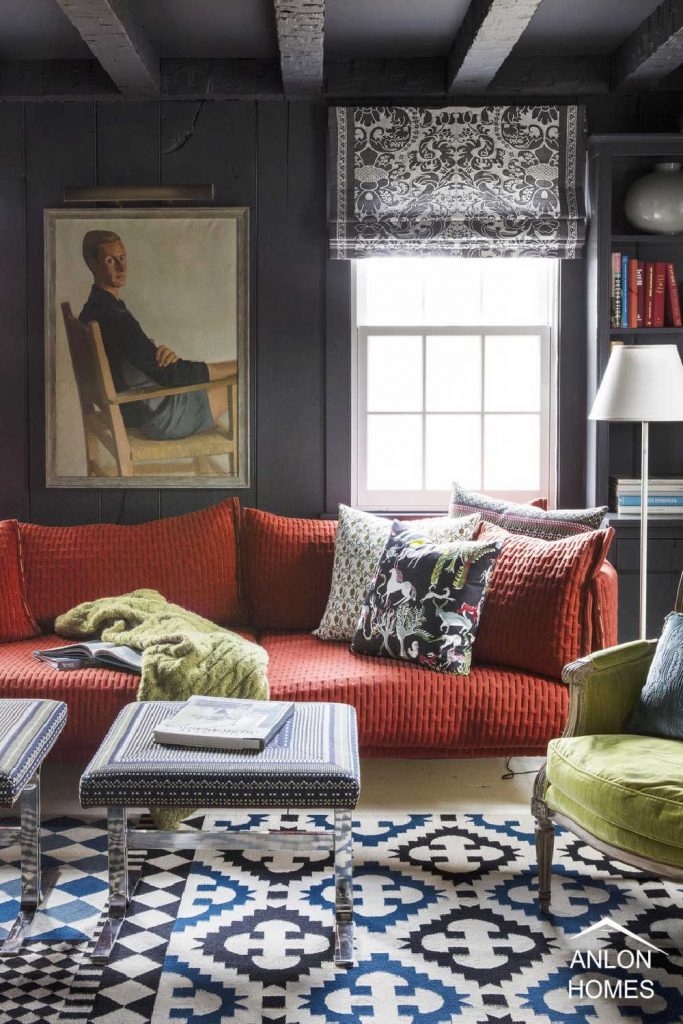 While there are plenty of details available, the overall style of a Roman shade generally falls into one of two camps—relaxed or constructed. Relaxed shades have no rigid supports inside and allow the fabric to sag gently under its own weight, which creates a curve at the bottom of the shades when they’re raised. For this reason, says Rodriguez, they’re often called “soft smiley” shades in the industry.

Constructed shades have sewn-in horizontal rods, dowels, or battens to create a more rigid appearance with a straight edge at the bottom. Rods may be added at the bottom of the shade or in each fold over the full height of the shade, depending on the desired look.

Couturier says his decision on what style to use usually depends on the fabric he has selected. “If the fabric is fairly strict and stiff, I do a strict, constructed shade,” he says. “If it is a soft silk taffeta, then I do a soft, relaxed shade.”

Both relaxed and constructed shades function equally well on most standard-size windows. However, on very wide windows, relaxed shades may become difficult to manage. “You may have to do a little dressing after lifting them” and manually smooth out the folds each time, says Rodriguez. “But with constructed shades, once the fabric learns its folds, they tend to function flawlessly each time.”

Not all shades need to be lined. For simple sheer Roman shades, many designers use the selected face fabric by itself for a visually light appearance. But in other situations, using a lining—a secondary fabric sewn to the back of the face material—can give blinds a more finished, luxurious look. “There’s a lot that goes on behind the shade that’s not necessarily intended to be seen,” says Rodriguez. “Lining helps to hide the lift strings at the back of the shade when light filters through from behind” while also reducing the amount of sun that enters the room.

Some fabrics also benefit from the addition of interlining, a slightly thicker material between the face fabric and lining that gives the shade a more substantial look. For instance, “Silk by itself can be very flat,” says Rodriguez. “For silk to really shine, an interlining adds body.”

A Roman shade can be raised and lowered with three types of controls—integrated electric motors, a continuous loop system, or cord and cleat. “I’ve used them all, and there is no best solution,” says Couturier. “Each is equally unattractive,” he jokes, but necessary.

Motorized shades offer the ultimate in convenience, as they can be operated at the press of a button and programmed to assume preset positions. But they are also the most expensive solution and require electrical wiring that reaches each shade, which can usually be added only while undertaking a major renovation.

Continuous loop, which uses a length of beaded chain to turn a clutch mechanism that raises and lowers all lift strings equally, is the most popular manual control because it’s easy to operate and consistent.

Cord and cleat, where all the lift strings are combined into a single cord held by a cord lock or cleat, offers a more traditional look and quieter operation than continuous loop but also has the highest chance of malfunction. “It’s not foolproof against snags,” says Rodriguez. “Because you have all these strings condensed into one cord, sometimes one of them may get jammed, and then your shade will lift lopsided.”

One of the big questions when specifying Roman shades for a room is whether to mount them inside or outside the window frames. Sometimes there is simply not enough space within a window frame to hold a shade, which makes the decision easy. Otherwise, “It all depends on the architecture,” says Couturier.

“If it’s a modern home and the frames are not particularly attractive, I mount the shades outside and all the way at the top of the walls,” he says. “That always adds a sense of height, which is never bad.” On the other hand, “If the frames are beautiful and the architecture classic, I mount them inside the window,” he notes, so they don’t obscure the decorative moldings.

When you build a custom home, there are thousands of choices to be made, and we are here to guide you through the process. It may be your first and forever custom home, but for us it’s a process we’ve developed through decades of experience.