Growing up in the Portland area as the son of an HVAC contractor who became a builder and retired as the senior mechanical inspector for the City of Portland, it’s no surprise that I chose building and development as my path. Some of my earliest memories are racing around crawl spaces and attics, helping my dad lay out the ductwork on jobs.

I got out of the Army at 21 years old and started working on construction sites doing odd jobs, clean up, framing, siding whatever I could do to learn. Just a few short months later I started managing the developing and building of my first subdivision on 139th just north of Burnside. I still drive by it from time to time. I was 22 years old and learned very quickly that the best way to manage people and processes was to create a team atmosphere. No one wanted to listen to a 22 year old tell them what to do or how to do it, but they did want the team to accomplish the goal. From that day on relationships and mutual respect mattered most to me.

After developing hundreds of lots, building hundreds of homes and completing countless remodeling jobs for other people I decided I wanted to do it on my own. I knew I would need an amazing team. The Anlon team has grown to include the best realtors, engineers, architects, office managers, controllers, project managers and sub contractors. After all this time the one thing that has not changed is my desire to create the absolute best team to accomplish the goal. Our goal is simple, do the best job we possibly can for each and every client every day, no matter how big or small the job is.

A few years ago, just after starting Anlon Construction, I met my amazing wife who helped me realize that business is about so much more than money; it is about the experience and the relationships we create along the way. I want a company that my wife, my kids and I can all be proud of. We learn something new every day and every day we try to improve. I am one of the lucky ones. I truly get to say that I love what I do.

Scott grew up in a small logging town in Idaho where he spent a lot of time in the woods.
Growing up Scott and his mom would look in the Sunday paper for the house plan of the week. They would study the plan and talk about changes that would make the plans better. When he reached High School, he took drafting to learn more about the design process of a home. Scott then attended and graduated from Arizona State University with a Bachelor of Science Degree in Architecture.
After graduating he returned home and went into the family logging business. Then, went to work at the lumber mill where his grandfather had retired from. After several years, Scott knew what he didn’t want to do for the rest of his life so, he got a job in Vancouver, WA doing estimating and contractor sales for a lumber supplier.
After that, Scott spent the next couple of years exporting homes overseas. He was sending homes to Japan, China, Russia and even had a 50-lot subdivision in Korea. While overseeing the estimating, construction and shipment logistics for these jobs he went back to college on his lunch hour to learn Japanese. This helped him understand his client’s needs.
Scott then had a chance to work for a local construction company. With hard work he moved into the Operations Manager position while the company grew from 50 homes to building over 1,000 homes a year.
After 12 years working on subdivisions and production homes Scott decided to make a switch to custom homes. Working with the clients closely to build their dream homes had an appeal and sense of accomplishment that he enjoys. Scott has built 7 Street of Dreams homes and was recently named Builder of the Year.
Scott’s friendship with Mike and their similarities made making the switch an easy decision and one that he has thoroughly enjoyed. Scott is excited about what the two of them can accomplish now that they are working together. 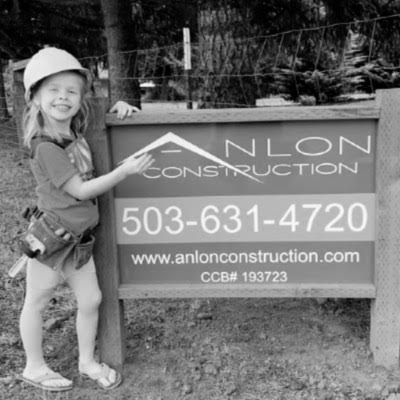 McKenna has literally grown up in this business and loves seeing daddy and his team build houses.  She is still a little confused that every house that is being built is not being built by Anlon and dad says that’s ok.

Her favorite part of the business is the team.  She loves getting to know the people and learning all about them and thier dogs.  On the job sites, McKenna focuses on the details: from picking up nails and trash and questioning why people are making the choices that they are in their home.

Her major skills are writing on the white board, taking gum from other employee’s desks and checking the overall quaility of homes, especially opening and closing all the cabinet doors.

McKenna currently spends her days as a Redland Wildcat and works for the company very part time but loves learning and is excited to someday be in charge.

When asked what she would say to people thinking about building a home she said “Daddy and his team build the best houses and I can’t wait to meet the people you guys get to build for”.

That seems like a solid sales pitch to us.